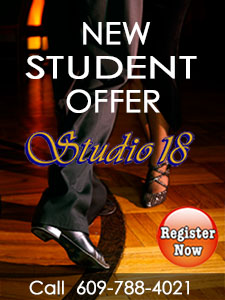 John Travolta, White Suit, Fancy “Look-at-Me” Pose! Get the picture?!? If you remember the 70′s, you know that the movie ‘Saturday Night Fever’ was a huge part of what epitomized the 70′s! And the dance…was (and still is) known as ‘Hustle’ (aka: ‘Disco’).

New York City is said to be the birthplace of hustle, at the beginning of the 1970′s. The dance became so popular, and spread throughout the entire world, so rapidly, that today; there are several versions/styles within hustle itself. It should be known that hustle’s actual origin is in fact ‘Latin-inspired’. Most of the upper-body positioning, and arm-movements, are based on the popular latin dance ‘Merengue’. And the turns, most often done by the ‘follower’, are done with the speed of ‘Salsa’!

For pure beginners, the best way to learn hustle, is to begin with what is known as a “4-count hustle” (as a prelude to learning the more common and most popular “3-count” version… aka: “And-One Hustle”). Some will disagree with that statement; however. So it truly is a matter of opinion and/or preference among both instructors and students. The bottom line is, no matter how you slice it; hustle is all about high-energy and a boat load of fun! And by the way; today’s hustle lovers are not ‘stuck in the 70′s’! No way! Much of today’s ‘Top 40′ sounds are in fact hustle tunes! Generally; whenever you see people ‘freestyle dancing’, in a club, a given couple could connect and break out into an electrifying hustle at any given moment!!!

Hip-Hop Dancing is not currently offered at Studio 18.

If you ask several people to define the term “hip hop” chances are you will here several different answers.

Hip hop is much more than a way of moving to hip hop music…it is a way of life. Hip hop is a lifestyle that includes its own language, music, wardrobe style and style of dance. Some people believe that hip hop dancing is simply moving to hip hop music. However, hip hop as a dance style is anything but simple. Hip hop dancers frequently engage in friendly battles or informal dance competitions. In an article appearing in Dance Teacher magazine, Rachel Zar discusses the top five elements of hip hop dance.

1. Popping consists of quickly contracting and relaxing your muscles, causing a jerk in your body. These jerks are known as pops or hits. Popping is performed with other dance moves and poses to the beat of the music.

2. Locking consists of performing a series of locking movements, which involves performing a quick movement, “locking” into another position, then holding the last position for a few seconds. The hips and legs usually remain in a relaxed position while movements of the arms and hands are more distinct and exact. Movements are big and coordinated closely with the beats of the music. Locking has a bit of a comedic flair and is usually performed to funk or soul music.

3. Breaking (also referred to as b-boying or b-girling) is probably the most well-known element of hip hop dance. Breaking is very unstructured and improvisational, and evolved from a style of dance known as uprock. Breaking, or breakdancing, is composed of movements performed at different levels: toprock (performed while standing), downrock (performed close to the floor), power moves (acrobatics) and freeze moves (poses).

4.   Boogaloo is a very loose movement, mostly using the hips and legs. Boogaloo seems to give the illusion that the dancer has no bones. This style is closely related to popping, with dancers involved in rolling the hips, knees, legs, and head.

5.  Social dances, or ’80s party dances, came about during the 1980′s as popular dances at the time were transformed by club dancers. Social dance is a freestyle dance style and is the element of hip hop that is often seen in music videos.


More information or purchase the video shown above.

Studio 18 – Making Dance a Part of Life; One Step at a Time!
Copyright © 2021 All Rights Reserved